Welcome to Toyota RV For Sale!

The Toyota Motorhome is a classic Class C RV that encompasses a variety of motorhome models from various manufactures. These vintage and collectible motorhomes were made in 70s, 80s and early 1990s. For more information on this see the Toyota Motorhome History below.

by Toyota RV For Sale in Featured 0

by Toyota RV For Sale in California 18

Never Say Never. Up for sale is a one of a kind 87 Dolphin 4×4 factory converted by Wolverine.  Wolverine conversions became popular in the 1970s, prior to toyota offering 4 wheel drive trucks in […]

Custom 4WD Toyota Chinook conversion. This truck has been my project for the past year and a half, but things changed and I no longer have the resources to work on it. It needs some […]

1993 HiAce Cruising Cabin in Portland, OR

Never Say Never. Up for sale is a one of a kind 87 Dolphin 4×4 factory converted by Wolverine.  Wolverine conversions became popular in the 1970s, prior to toyota offering 4 wheel drive trucks in […]

1987 Toyota Conquest RV with ~55k miles for sale. In good condition and still has the original 22RE engine which runs great! The interior of the RV has been renovated to increase the living space […]

Engine and transmission in excellent condition, air conditioning, interior in good condition, tires good. No generator. Just discovered there is a water leak from ceiling. If you are a handyman and can do repairs yourself […]

1993 Winnebago Warrior in New Castle, IN

Latest Ads in the United States 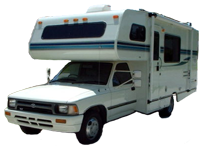 Most of the visitors on this are familiar with the motorhome classifications but for those who are not here is a quick general reference guide.

Class C Motorhomes are often referred to as Alcove or Cab-Over Motorhomes as they commonly have a double berth (sleeping area) over the driving cab. This is combined with a caravan style body of medium length, usually 22 to 33 feet long.

Class C motorhomes are advantageous because the owner receives better gas mileage like a camper van but has more self contained accommodations like a full size Class A motorhome. This class of motorhome is considered semi-integrated as sometimes the cab is separate from the camper portion, similar to a truck with a camper shell. Toyota Motorhomes are iconic as they were some of the first Class C motorhomes to hit the road back in the 70s.

Today most major motorhome manufactures utilize the Ford E Series chassis to base their motorhome designs on, however back in 1970s they used the Toyota Truck. 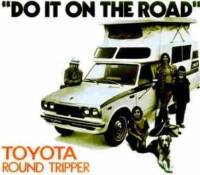 This is the truck that the Toyota Tacoma was originally based on, but at the time was simply known as the Toyota Pickup in the United States or the Toyota Hilux in international markets.

Motorhomes were made on the standard duty Toyota truck chassis from 1977 to 1985 before moving to a one-ton cab and chassis in 1986. Motorhome makers continued to fabricate their shells on Toyota trucks until 1993 when weight restrictions caused them to move to the Ford E-Series (E450/550) Econoline chassis.

Other popular Toyota Motorhome models were the Itasca and Winnebago Warrior both made by Winnebago Industries. Lastly Gardner Pacific was responsible for making the popular and iconic Toyota Sunrader Motorhome.

Rather you are a buyer or seller and have found this site useful to you, please consider donating to help us provide a better experience for you.

While ToyotaRVForSale.com is designed to be the ultimate online resource for finding Toyota Motorhomes For Sale; this site, its owners, advertisers or licensors are not directly involved in the physical sale of any vehicle. This website is simply provided as a tool to facilitate buyers and sellers connecting for the transaction.

In addition, this website is not endorsed by or affiliated with the Toyota or other motorhome brands nor is it certified by Craigslist, eBay or other classifieds resources. The use of trademarks and brand names are executed in accordance with the Fair Use clause of The Copyright Act of 1976. As this site is educational in nature, use of this copyrighted material is covered under this clause. All trademarks belong to their respective owners. Please view our DMCA Notice for more information about copyright and material presented on this website.

Used the links below to find a classic Toyota Class C RV for sale sorted by popular manufacturer, trim, model or model year.

Use the links below to find Toyota RVs listed for sale in the United States & Canada. Regions are further broken down by states / provinces and cities / counties or general areas..